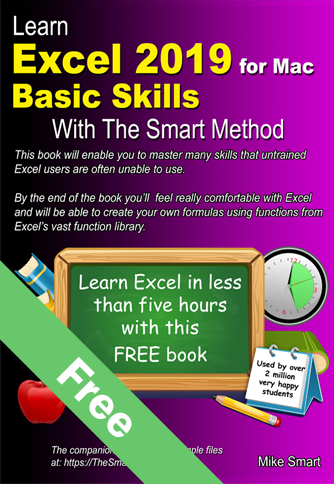 For over fifteen years,  large corporations, government departments, schools, colleges and the armed forces have used Smart Method® classroom courses to train their employees. We’ve now published the same materials as a free e-book.  This means that your learning success will be guaranteed by using our FREE e-book.
The free Excel 2019 for Mac tutorial is also available for Excel:  2016 for Apple Mac , 365 for Windows, 2016 for Windows, and 2019 for Windows.

Here are just a few of the topics Covered

Understand everything there is to know about AutoFill including text and numeric series, adjusting formulas, custom fill series and linear and exponential series.

Understand everything there is to know about Flash Fill including manual and automatic Flash Fill methods, splitting de-limited text, using multiple-examples and concatenating text.

Mike Smart is the founder and CEO of The Smart Method. During Mike’s long career as an IT consultant, Mike specified, designed and delivered IT solutions for large corporations all over the world. In 2002 Mike decided to specialize in IT training and founded The Smart Method.

In 2008 Mike realized that he could only ever teach a few thousand students in his classroom courses but could help millions of students by producing his Excel courses in book form. His first Excel books (covering Excel 2007) rapidly became best sellers and his books have topped best seller lists ever since.

Would definitely recommend. I am newbie with excel. This is so wonderfully written, easy to understand and very informative. The text in which it is written is awesome, no faff, no pink and fluffy, no waste of time. Brilliant Book.

This is probably the best training manual I have ever read. I find most manuals too wordy and quite honestly tedious. Mike Smart wins outright on several points. Each main topic is broken down to lessons on two facing pages one advantage is that if you have a spare 10 to 15 minutes you can complete a lesson with ease.

Our books provide a route to become a true Excel guru

If you aspire to become a true Excel guru, we also have Essential Skills and Expert Skills books in this series that will teach you very advanced features such as: